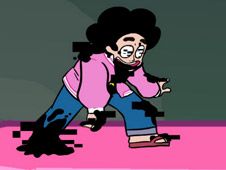 What is FNF vs Pibby Steven & Spinel?

Steven and Spinel are back as your newest musical antagonists, but this time you have to face off against corrupted and virus versions of them, known as Pibby, which is a series that has recently started and has gained quite a lot of attention, and we now invite you to face these characters right now on the song called “You’ll Make the Change”!

Defeat Pibby Steven and Spinel and help them return to normal!

To win you need to reach the end of the song, and do so by playing all the notes according to the charts, when your turn comes, of course, so when you see arrow symbols match above BF's head, press the identical arrow keys. Be careful not to miss doing it multiple times in a row, because you then lose.

The new mechanics of this game mean that you must avoid the glitchy notes and the ones that are shaped like crescents, since they make you lose if you hit them, but make sure to hit the pink triangle notes if you want to get closer to victory, faster! Good luck!