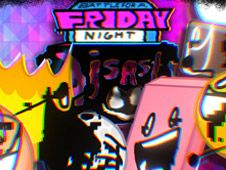 What is FNF X Pibby Battle for Corrupted Island 2.0 (VS Pibby BFDI)?

A new Pibby Battle for Corrupted Island is about to happen in the world of FNF, in which we invite you to participate right now and have lots of fun, even more so because we offer you a really big and awesome tracklist to enjoy:

Whether you choose to play in the story mode or free play mode, make sure to reach the end of the songs by playing their notes according to the charts for the character on the right.

To do it, press arrow keys at the same time as the identical arrow symbols match above their head. If you miss doing it multiple times in a row, your health bar depletes and you need to start again from scratch. Enjoy!