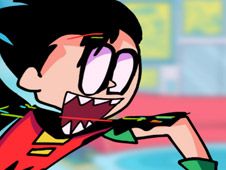 What is FNF vs Pibby Corrupted Robin?

The Pibby virus Corrupted Robin, and only you and BF from FNF can bring him back to his normal self, which you do by defeating him in a rhythm battle on one and only awesome songs called 'Bossy'!

Only you can music can save Corrupted Robin from Pibby!

Hit the play button to start, and, then, as the song goes on, watch for when arrow symbols match above BF's head, which is when you press the identical arrow keys, something you have to keep doing until the end to win. Don't miss hitting too many of the notes in a row, since that leads to you losing. Enjoy!