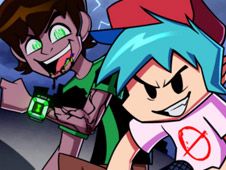 What is FNF Corrupted Omniverse vs Pibby Ben 10?

FNF Corrupted Omniverse is a full-fledged mod where you have to go against Pibby Ben 10, in the hopes that if you defeat him in the rhythm battles, you are going to bring him back to his sanity, after he got the virus, and for that we invite you to challenge him on this full tracklist:

From the main menu you need to choose between playing in the story mode or free play mode, and in either case, give your best to reach the end of the songs by playing their notes according to the charts, which is how you win.

Press arrow keys at the same time as the identical arrow symbols match above BF, on the right. Make sure not to miss your notes too many times in a row, that depletes your health bar, which means you've lost when it is empty. Good luck!