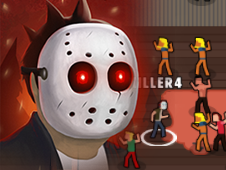 It's quite often that on our website we make sure to bring along some of the best new io multiplayer games on the internet, but since the genre has become so popular lately, we make sure to curate and bring along only the best of them, which is the reason why right at this moment you're invited to play Killer.io online for free!

Become a killer and don't get caught!

This is a perfect game for Halloween since you get to dress up as an avatar that is inspired by Jason from Friday the 13th, you have a shark, a clown, an alien, a man with a rooster head, or even a Mario-like character that you can embody. Only the masked one is available for starters, as you have to earn coins and use them to unlock the other ones.

Use the mouse to move around with your killer avatar, going around the house and attacking people, as you have to kill them to earn points, and they can be either NPC's, or other players. Make sure to move away from the crime scene as fast as possible, because if you get caught by crowds who see you, you lose.

Choose your player name, hit the play button, enter the room with players worldwide, and let the massacre begin!