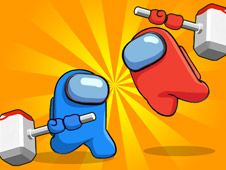 What is Impostor Royal Killer?

Let's become the Impostor Royal Killer in one of the best new Among Us multiplayer action games online we've had in recent times, a high-quality addition that takes the notion of imposters that this original game had made you used to and brings something new and interesting to the mix!

Be the last standing impostor by being the best royal killer!

You will be thrown in a room with three other players, so a total of four, and with the mouse you move around with your character, dragging to move and releasing the mouse button to stop.

Boxes will be dropped from the sky, and they leave weapons in them, and if you pick one up, you become the imposter, so use that weapon to kill the other ones moving around.

You can also find protective shields in some of the boxes, so use them to defend yourself. Use the weapons to kill the other players, and if you remain the last one standing, you win the match, then get moved to a new room where you have to defeat other enemies.

Good luck to you all, and we definitely hope to see more of you on our website, since more awesome games are still coming your way!