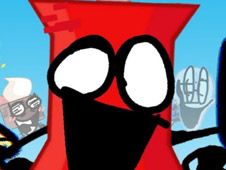 What is FNF Battle for Corrupted Island vs Pibby BFDI?

The Pibby virus has entered the world of BFDI, which means the FNF Battle for Corrupted Island mod, where we've not got for you a whole new tracklist of songs, which we are sure you are going to adore playing through and singing:

To do it, press the arrow keys at the same time as the identical arrow symbols match on the top right side of the screen. Miss too many notes in a row and your health bar depletes and you lose when that happens. Good luck, enjoy!