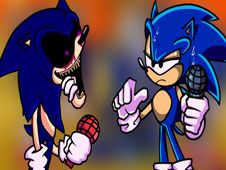 What is FNF: Sonic.Exe vs Sonic Full Week?

The battle of Sonics that you were waiting for is finally here, and, of course, we're talking about a battle between the regular Sonic the Hedgehog that you all know and love, and the cursed, horror, and scary version from the internet known as Sonic.Exe, with cameos from Majin Sonic, Lord Sonic, Sunky as well, who you will also be able to beat, all on the following custom songs:

Sonic Vs Sonic.Exe and his evil Sonic friends, LET'S GO!

Of course, you will choose between the story mode and free play mode, as you usually do in these games, and then give it your best to beat the evil Sonics by reaching the end of the songs, which only happens if you play all the notes when it comes to your turn, with your own Sonic.

So, when arrow symbols match above Sonic's head, press the very same arrow keys from the keyboard, but remember that if you miss pressing those keys too many times in a row, you need to start again from scratch, as you will have lost. Good luck, and enjoy this game as only here is possible!