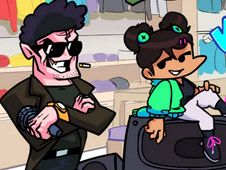 A brand new interesting mod from FNF has just made its way on our website, where we invite you all right now to have a lot of fun with the game called Friday Night Funkin’ Untitled Remixes, where the original weeks have their characters reskinned, and the songs are remixed, with this being so far true for Week 1, with the other ones coming up soon, so try revisiting this mod as often as you can!

The Untitled Remixes are here, ENJOY THEM RIGHT NOW!

In both the story mode and the free play mode, your goal remains the same, which is playing all the notes of the songs according to the charts, until you reach their end, which is when you win, so when you see arrow symbols above BF's head match one another, make sure to press the same arrow keys yourself, and keep doing it until the song ends.

Be careful not to miss pressing the right keys too many times in a row, because you will then lose and have to start again from scratch. Enjoy!