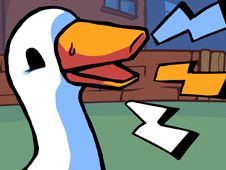 What is FNF Untitled Goose Mod?

In the FNF Untitled Goose mod, Boyfriend's hat was stolen by this animal from a video game, and now it needs to defeat it in a rhythm battle slash chase-around on the following amazing tracklist:

Defeat the Untitled Goose only in FNF!

Whether you play in the story mode or free play mode, your choice is taken in the main menu, you need to do the same thing, which is playing your notes according to the charts until the song ends, which is when you win.

So, press the identical arrow keys to hit your notes when floating arrow symbols match above BF. Don't miss doing it too many times in a row, you lose and have to start again from scratch. Good luck, enjoy!