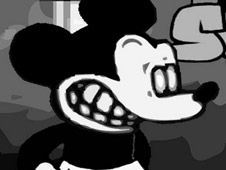 We continue our series of FNF Games with Suicide Mouse, which we saw is quite popular, so we would not miss out on the chance to share with you a game like FNF: Suicide Mouse Sings a new Really Happy Song, where you will play a fan-made song known as “Very Happy”!

Sing as happy as possible you can to cheer up the Mouse's day!

As the song goes on, when your turn comes, arrow symbols will match above BF's head, and, when they do, you have to press the same arrow keys on the keyboard.

Keep at it until the song ends to win, but know that by missing multiple notes in a row you are going to lose, and have to start the game again from scratch. Enjoy!