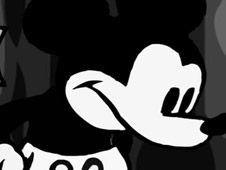 You might not believe it, but it seems that depressed Mickey Mouse has gotten even sadder, as right at this moment you and Boyfriend will sing with him a new and awesome fan-made song known as 'Very Unhappy', where you have to give your best to duet and take this song to its conclusion!

You will have to watch for when arrow symbols above BF match with one another at the top of his head, and, when they do, you have to press the same arrow keys on the keyboard, something you have to keep on doing until the end of the song in order to win.

Know that missing to press the keys multiple times in a row leads to you losing the game and having to start it again, so be careful not to let it happen for anything in the world! Good luck!