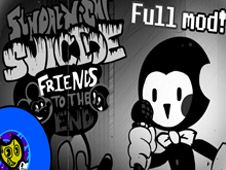 What is FNF: Suicide Mouse Vs Bendy?

Wow, two black and white characters are going to be going at it in the latest FNF rhythm battle of our website, with both of them being quite iconic, and we are talking about none other than Suicide Mouse and Bendy, who will face off against one another on the following songs:

It's time for the most depressing FNF battle ever!

Whether you choose the story mode or the free play mode, the way you win remains the same, and it is by reaching the end of the songs, and you can only achieve that point if you play all their notes according to the charts.

This means that when you see arrow symbols match above your character's head, you will press the identical arrow keys from the keyboard, and keep doing it until the song ends.

Make sure not to miss pressing the keys multiple times in a row, since that leads to you losing and having to start again from scratch. Good luck, enjoy!