FNF vs Mokey the Mouse 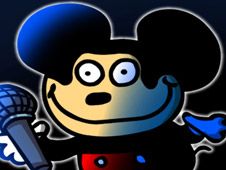 What is FNF vs Mokey the Mouse?

It seems that there are more and more versions of Mickey Mouse coming up in our category of Friday Night Funkin' Games, where you go up against cartoonish and funny versions of this character, just like you are doing today against Mokey, who you have to defeat on all of these two custom songs:

You will choose in which mode you want to play from the main menu, and then give it your all to reach the end of the songs by playing all their notes according to the charts, which is done by pressing arrow keys at the same time as arrow symbols are matching above BF's head.

Be careful not to miss pressing the keys multiple times in a row, because if that happens, you will have lost and have to start again from scratch, something we don't recommend in the least, as we only want you to focus and win! Enjoy!