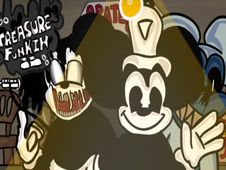 What is FNF vs Mickey Mouse Treasure Island (Treasure Funkin)?

In FNF you now arrive at Mickey Mouse's Treasure Island, where BF and GF have had tons of fun, but now want to escape, and the only way that happens is if you help our blue-haired protagonist defeat Mickey Mouse in a rhythm battle, something that you will do on lots of new songs in addition to the demo version:

Let's have a funkin' time at Treasure Island!

From the game's main menu you will make a choice between the story mode and free play mode, and then, in either situation, you give it your best to play all your notes according to the charts properly, so that you reach the end of said songs and win!

To play the notes you need to use the arrow keys, meaning that when you see arrow symbols above BF match one another, you press the identical arrow keys at the same time.

Be careful not to miss doing that multiple times in a row, or you will be forced to start again from scratch. Good luck, we wish you the best, and tons of fun as per usual!