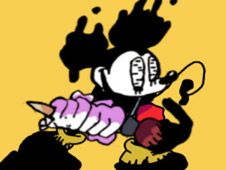 What is FNF X Pibby vs Epic Mickey Mouse?

Epic Mickey Mouse is a beloved video game character who you now have the chance to help get rid of the Pibby virus in him, something you should be doing right now by defeating him on the track called 'Survival'!

Defeat the Pibby inside of Epic Mickey Mouse with FNF rhtyhm!

Watch as arrow symbols match above BF's head, and when they do, press the identical arrow keys to hit your notes. Keep on doing it until the song concludes to win, but be careful not to miss hitting the notes too many times in a row, or you lose. Good luck and enjoy!