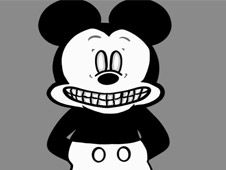 What is FNF vs Mickey Mouse.AVI The Final (Sunday Night)?

It's time for The Final music battle vs Mickey Muse.Avi, this time taking place on Sunday Night, where we hope that by winning against this depressed mouse you will show him the joy of music, love, and life, something that you do on the following list of songs:

It's Sunday Night, time for The Final Boyfriend vs Mickey Mouse.AVI battle!

Make a choice between the story mode and free play mode, but know that in either case, the only way you win is by reaching the end of the songs and playing all their notes according to the charts, so be careful not to miss hitting multiple notes in a row, because that leads to you losing.

So, when you see arrow symbols match above BF's head, press the identical arrow keys, and keep on it without missing if you want to win. Timing and focus are the keys, so we wish you all the best towards that!