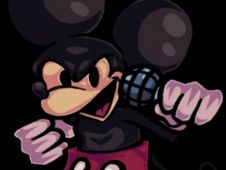 What is FNF Vs Horror Mickey Mouse?

Since it's currently Spooky Month, you should not at all be surprised by the fact that we can now offer you all the chance to have a rhythm battle against a Mickey Mouse that is horrific, a very scary version of this child-friendly fan-favorite character from Disney, who you will try to return to his normal self by beating him in a musical fight on the following songs:

In either the story mode or free play mode of the game, give it your best to reach the end of the songs, playing all their notes according to the charts, since that is the only way to win.

When the arrow symbols above BF match one another, you will have to press the same arrow keys from the keyboard, but be careful not to miss pressing the keys too many times in a row, since that will lead to you losing the game. Enjoy!