FNF Unknown Suffering but Everyone Sings it 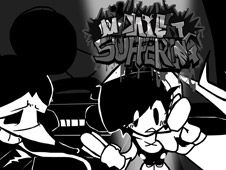 What is FNF Mid-Night Suffering vs Mickey Mouse?

In the FNF Mid-Night Suffering mod, Mickey Mouse lost everything in his life, making him depressed, and so he and Boyfriend will now sing together on a few songs and maybe become a normal mouse again, with this being the tracklist:

Whether you are playing in the story mode or free play mode, you need to reach the end of the songs by playing their notes according to the charts to win, without missing to hit them too many times in a row, you lose and have to start again from scratch.

So, press arrow keys when you see floating arrow symbols match above BF, getting the same ones at the same time to hit said notes. When your health bar depletes from too many missed notes, you will have lost, so don't let that happen but win instead and have plenty of fun!