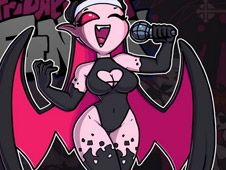 The Mid-Fight Masses mod from FNF has been one of the most popular ones we've had so far, and this is because it brought along new and interesting characters, and who doesn't love the concept of demon nuns? Sarvente is the name of this main character, and in this game, she is thicker than in the original, and her minion demons against you will also fight also have new designs, awesome new sprites, and their music is even sleeker than the first time!

You will fight these three characters on five awesome original songs:

Learn the rules of FNF right here, so you can defeat the devil nun!

Well, you will have won the match once you've reached the end of the songs and the progress bar is in your favor, and to arrive there you need to have good timing and rhythm so that you play the notes of the songs just as they are supposed to be played.

You will use the arrow keys, pressing them when the arrow symbols above BF match with one another, and not at any other time, or you miss that note, and missing too many notes in a row causes you to lose the battle.

We wish you good luck so that you win, and we hope that this is far from the final new Friday Night Funkin' game you play today on our website!