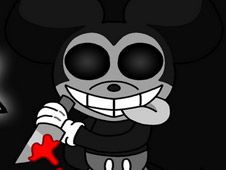 What is Friday Night Funkin’ Vs Suicide Mouse?

A deranged black-and-white Mickey Mouse is going to be the next internet creation that you will have to go up against in a musical battle on our website, where we invite you all right now to have tons of fun with the game known as Friday Night Funkin’ Vs Suicide Mouse, where you will deal with this character on two songs that describe his only two moods, ever:

Defeat the crazy Mickey Mouse through the power of music!

Whether you are playing in the story mode or the free play mode, the goal you have remains the same, which is reaching the end of the songs by playing all their notes according to the charts, something that is done by pressing arrow keys at the same time as the identical arrow symbols above BF's head match with one another.

Be careful not to miss pressing the keys too many times in a row, since that will lead to you losing the confrontation. Good luck, and we hope that this is far from the final new game of the day you try out here today!