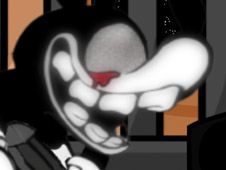 What is FNF Mickey Blinded By Sin?

Suicide Mickey Mouse returns right now with the FNF mod where he sings on one track called Blinded By Sin, and just like other encounters with him, we're sure you will help BF defeat him!

Defeat Mickey who has been Blinded by Sin, only in FNF!

Use the arrow keys to hit your notes, pressing them at the same time as the identical arrow symbols match above BF's head, and if you can keep doing it until the song ends, you win but know that if you miss hitting the notes multiple times in a row, you end up losing instead. Good luck and the best we wish you all!