FNF The Devil’s Swing vs Bendy 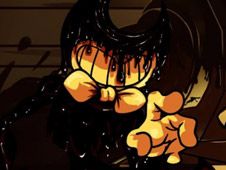 What is FNF The Devil’s Swing vs Bendy?

Bendy returns as an FNF antagonist for The Devil’s Swing mod, featuring a whole new tracklist for you to enjoy going up against this character in, just like you did in all the previous encounters. The songs are:

Survive The Devil's Swing in FNF by defeating Bendy!

Whether you're playing in the story mode or free play mode, win by reaching the end of the songs, which you do by playing all their notes according to the charts.

This means that when you see arrow symbols match above BF, you need to press the identical arrow keys at the same time. Don't miss doing it too many times in a row or you lose and have to start again from scratch. Enjoy!