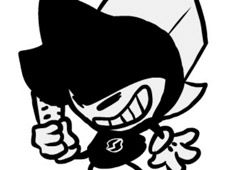 FNF 2010’s Funk is a mod featuring an Ink version of Boyfriend, whom you need to help defeat Bendy on one song called 'Rubber House'!

When floating arrow symbols match above Ink BF, press the identical arrow symbols at the same time, doing it until the song ends to win, while being careful not to miss your notes too many times in a row, because if your health bar depletes, you will have lost. Good luck, enjoy!