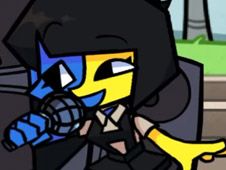 What is FNF: Rockefeller Street with ENA?

ENA is a girl who looks like a Picasso painting turned to life, and she is the newest protagonist in one of our newest Friday Night Funkin' Mods online for free, where right now she has to battle against a character called Shepherd, and you do this on a custom song called Rockefeller Street (Nightcore Mix).

While ENA might have been a protagonist on our website before, this is the first one with original songs, and where she battles a brand new character, so you can see why it's a must-play!

Can ENA master Rockefeller Street and win? Help her do it!

To play the notes of the songs you need the arrow keys, so when you see that arrows are matching above ENA's head, you have to press the same arrow key, and thus you play the note of the song. Do that until you reach the end of the song, the progress bar is in your favor, and then you win!

You can lose in case you miss playing too many notes in the song one after another, so be careful not to allow that to happen. Enjoy, and stick around for all the fun still to come!