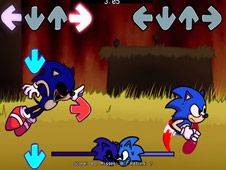 What is FNF: Sonic.EXE & Sonic Sings Confronting Yourself?

Both Sonic.Exe and Sonic are speedsters, despite one of them being a creepypasta, and the pair of variants are now going to sing Confronting Yourself together while being chased by a common enemy, so they would really need your help to reach the end of the song because that is the only way to escape their pursuer!

Let's sing and run with Sonic.Exe and Sonic, all while Confronting Yourself!

As the song and chase progress, when you see arrow symbols matching above your character, that is when you have to press the identical arrow keys, because that is how you hit your notes, and if you keep hitting them until the conclusion of the song, you will have won. Know that missing to hit too many notes in a row leads to your loss, so be careful not to let it happen. Enjoy!