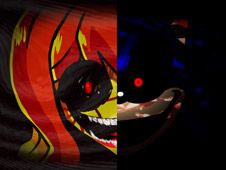 What is FNF: Monika.chr vs Sonic.exe?

FNF: Monika.chr vs Sonic.exe presents quite an interesting conundrum since neither evil versions of Monika nor Sonic are likable, but you will have to fight on the side of the hedgehog against the creepy Doki Doki Literature Club character, something that you will be doing in a full mod featuring four awesome tracks:

Monika.chr vs Sonic.exe, an FNF battle of evil music!

Both in the story mode and free play mode, to win you need to reach the end of the song by playing all their notes according to the charts. This means watching for the moment when arrow symbols match above Sonic's head and pressing the identical arrow keys at the same time.

Be careful not to miss hitting said notes too many times in a row, because if that happens, you lose and have to start again from scratch. Good luck and all the best we wish you all, as per usual!