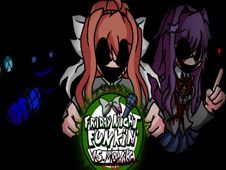 What is FNF vs Monika.EXE with Extra Keys?

The FNF Monika.Exe mod has now returned in a brand new form, as it has more songs, more keys, and, of course, that only means more fun for you all to have, so we hope that you give this game a chance right now, and win on all the following songs:

Boyfriend Vs Monika.Exe, now with more songs and extra keys!

Whether you play in the story mode or free play mode, to win you have to do the same thing, which is to play all your notes according to the charts until the song's conclusion.

To do that, watch for the moment when arrow symbols float and match above BF, and press the identical arrow keys at the same time. Don't miss hitting them too many times in a row, or you have to start again from scratch. Good luck, enjoy!