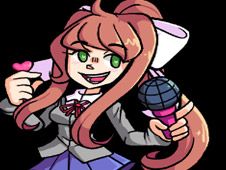 What is FNF: Monika Sings Week 6?

Monika has constantly been one of the most popular characters from DDLC to have appeared into our category of FNF Games online, so we are delighted that she is making her return here right now and here, with our team inviting you all to play FNF: Monika Sings Week 6, where instead of Senpai, you help BF defeat Monika, but on the same songs of Week 6.

Boyfriend Vs Monika, a Week 6 extravaganza!

You get to pick between the story mode and free play mode, it's your choice how you play the game and have to give your best to reach the end of the songs by playing all their notes according to the charts.

When arrow symbols above BF match, press the same keys and keep doing it until the end, but be careful not to miss pressing the keys too many times in a row, and you've got to start the game again from scratch. Have fun!