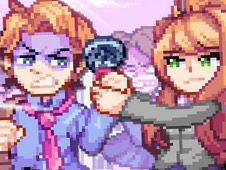 What is FNF vs Monika (Senpai Edition)?

Monika is a character that usually replaced Senpai in Week 6 of FNF, but today we're bringing you a different kind of experience because in the FNF vs Monika (Senpai Edition) mod, you take the role of Senpai, instead of Boyfriend, and will go up against Monika on the wonderful songs in this mod:

Senpai Vs Monika, a battle to remember!

You are going to use the arrow keys, pressing them at the same time as the arrow symbols above Senpai are matching, and if you do that until the end of the songs without making too many mistakes, you lose.

Instead, be careful not to miss the moment to hit the notes too many times in a row, because you lose and have to start all over again from scratch.

Pick either the story mode or free play mode, and then give this game your best, having fun as only with our daily content you can!