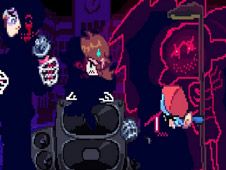 What is FNF vs Corruption Senpai?

The Corruption has reached Senpai and Boyfriend in their latest rhythm battle, with this new Week 6 mod of FNF featuring remixes and new tracks to go along with this new storyline, at the end of which you have to get rid of the virus by winning. The tracklist is as follows:

Let's get rid of the Corruption haunting Senpai from FNF!

In the main menu, you will have to make a choice between the story mode and free play mode, as well as a level of difficulty. No matter the parameters you choose, to win you have to do the same thing, which is to play all your notes following the charts until you reach the conclusion, which is where you win.

When arrow symbols match above BF, hit the same arrow keys at the same time, but know that if you miss doing that multiple times in a row, you lose and have to start again from scratch. Good luck we wish you all!