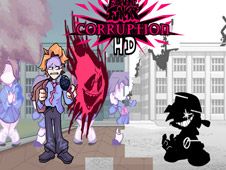 What is FNF Corruption vs HD Senpai (Week 6 HD)?

FNF Corruption vs HD Senpai (Week 6 HD) is even better than the original FNF Senpai Corrupted mod because this one brings all the viruses and the song in high-definition, meaning that everything looks better, sounds better, and the whole experience will be even more fun. Let's defeat this corrupted anime character on the following tracks:

Whether you choose to face this character in the story mode or free play mode, to win you have to do the same thing, which is reaching the end of the songs by playing all their notes according to the charts. When arrow symbols float and match above BF, you need to press the identical arrow keys at the same time.

If you miss hitting those notes too many times in a row, you lose and have to start again from scratch, so be careful not to let it happen. Good luck, and let's start all this fun right now!