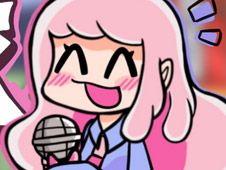 What is FNF vs Cloud (Notice me Senpai)?

Cloud is Senpai's biggest fangirl who really wants to be noticed by him, and she thinks that in order to achieve that, she would first have to defeat Boyfriend in a rhythm battle, since he already defeated her idol, so you and the blue-haired boy will now go up against this cute girl on the following tracks:

Can Cloud make Senpai notice her?

From the main menu you will have to make a choice between the story mode and free play mode, but, in either case, you only win if you reach the end of the songs, and that is accomplished if you play your notes according to the charts. This means watching for when arrow symbols match above BF and pressing the identical arrow keys at the same time.

Be careful not to miss doing it multiple times in a row, because that happening leads to you losing and starting again from scratch. We wish you all the best, and we hope to see you around since more games with FNF are still on their way!