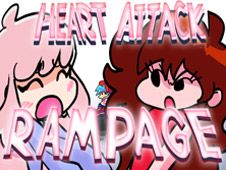 What is FNF vs Cloud (Heart Attack Rampage)?

Girlfriend and Cloud, a Senpai fangirl are battling it out for a copy of his game, Hating Simulator, and you will now take part in their rhythm battle over the game through this mod featuring the song called Tug-of-War!

Girlfriend Vs Cloud, the battle for Senpai!

As the song progresses, when you see arrow symbols match above GF's head, that is when you need to press the same arrow keys, and you need to keep at it until the song concludes to win. Be careful not to miss doing that multiple times in a row, since you lose after missing too many notes in the chart. Good luck, enjoy!