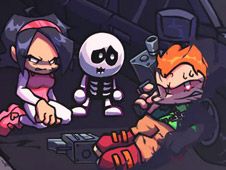 The new FNF Corruption Takeover mod is called Pico Week Nexus, because Pico is being slowly consumed by the virus, and he really needs to win his rhythm battle to not get completely overtaken, and you will help him do so on the following tracklist:

Stop the FNF Corruption Takeover of Pico in the Nexus Week!

Whether you choose the story mode or free play mode, make sure you hit your notes according to the charts until the end of the song, which is when you will have won. So, when you see arrow symbols match above BF, press the identical arrow keys at the same time.

Be very careful not to miss hitting notes multiple times in a row, that will lead to you losing and having to start all over again from scratch. Good luck and the best we wish you all, as always!