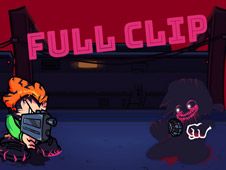 What is FNF Corruption vs Pico Full-Clip?

A new corrupted FNF battle between BF and Pico is about to unfold, with your help, but this time on a new song called 'Full-Clip', something that we really hope none of you will be missing out on for anything in the world, since you would only be missing out on tons of fun that you could be having!

It's a Full-Clip FNF showdown of Corruption, let's win it!

Watch for the moments when arrow symbols float and match above BF's head, and at that same moment you need to press the identical arrow keys to hit your notes, and hitting your notes until the song's conclusion is how you achieve victory. If you miss hitting notes too many times in a row, though, you lose and have to start again from scratch. Good luck, enjoy!