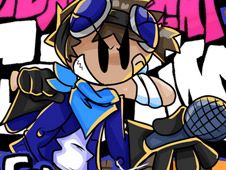 What is Friday Night Funkin vs Clip?

Clip is a guardian guarding a door through which Boyfriend wants to enter, so of course he would fight him in a rap battle to get passage, which is what you help the protagonist do right now and here in the game known as Friday Night Funkin vs Clip, one of the best new mods to have been added here for you all, where you go up against this character on five awesome songs:

Help BF defeat Clip and get safely through the door!

This mod, like most others, is playable in either the story mode or the free play mode, where you have the same goal of reaching the end of the songs by playing all their notes at the right time of the chart.

To do this, press arrow keys at the same time as the arrow symbols above BF match one another, and keep at it until the song concludes, but know that if you miss doing it too many times in a row, you lose the whole game.

We wish you all the best, tons of fun, and hope that we see more of you here, where fun never stops!