FNF: Phantasm but Old and New GF Sings it

FNF Phantasm but Everyone Sings It 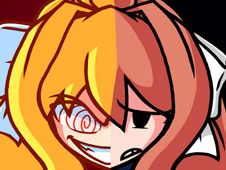 What is FNF: Monika and Lunatic Sings Phantasm?

Lunatic is the alter-ego of Monika, and she is no longer fighting against it, which is why the two personalities of the same anime girl are now going to have a duet over the FNF song called 'Phantasm', so let's help her realize it!

Let's duet the song 'Phantasm' with Monika and Lunatic!

When you see the arrow symbols float and match above your character's head, that is when you have to press the identical arrow keys to hit your notes, and if you keep doing it until the conclusion, you win. Don't miss hitting the notes multiple times in a row, because that leads to you losing. Good luck and all the best we wish you!