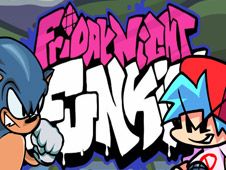 What is FNF vs Extra Life Sonic (Revival)?

FNF vs Extra Life Sonic (Revival) is yet another addition to our long streak of FNF Sonic mods online for free we keep bringing over for you all, one better than the other one, where you can always have copious amounts of fun, just like it is happening today when you battle Sonic after he used his extra life, which is why this is the track you do battle on:

Let's get a musical revival with BF and Extra Life Sonic!

To win this battle you need to reach the end of the song by playing all of its notes according to the charts, so watch when arrow symbols match above BF's head and press the identical arrow keys at the same time to hit your notes. Be careful not to miss multiple notes in a row, because that happening means losing and having to start again from scratch. Enjoy!