FNF: Phantom Self (Fleetway Confronting Yourself) 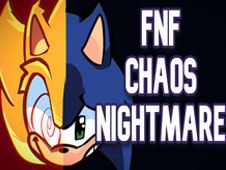 What is FNF: Sonic Vs. Fleetway Chaos Nightmare?

Sonic will have to face off against his own musical nightmares in a brand new mod where he will fight inner demon versions of himself, in a mod called Fleetway Chaos Nightmare, which has a one really cool song called 'phantasm'!

Help Sonic use music to win against his nightmares of chaos!

Get to the end of the said song to win, and to do that you need to play your notes according to the charts. So, when you see arrow symbols float and match above your Sonic, press the same arrow keys. Get the timing right to hit the notes, but screwing it up too many times in a row will lead to your loss, so be very careful.

Good luck, we wish you tons of fun, and we hope that you stick around for more of it, it's totally worth it!