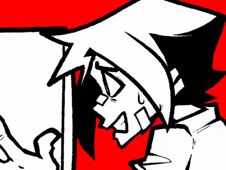 The FNF Escapism mod has now reached the chapter known as Chaos Nightmare Season 2, where you battle against scary characters on the song called 'Departure'!

When the floating arrow symbols match on the top right side of the screen, that is when you need to press the identical arrow keys to hit your notes, doing it until the song ends, and then you win, but know that missing your notes too many times in a row your health bar depletes and you lose. Good luck, enjoy!