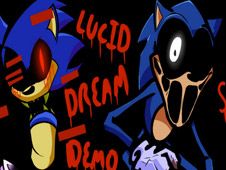 What is FNF Red Ring Nightmare vs Sonic.FLA?

New Sonics have appeared in the world of FNF for you and BF to defeat, and that is always a blast, since he is surely one of the categories' most popular characters from other media, so it makes us very happy that you can now play this mod that also features some new tracks for you:

Whether you are playing this game in the story mode or free play mode, make sure to reach the end of the songs by playing all their notes according to the charts, since that is how you win.

To play notes you need to watch for when arrow symbols float and match above BF's head, and at that same time press the identical arrow keys.

Be careful not to miss hitting said notes multiple times in a row, because that happening to you means losing the game and having to start again from scratch. Enjoy!