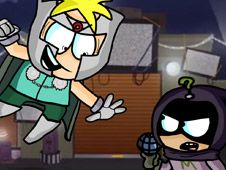 In the new FNF South Park Chaos Cover mod, you have a battle between Professor Chaos and Mysterion, which are the alternate egos of Butter and Kenny, who will now have a battle with one another on a song from FNF Sonic.Exe.

It's time for a South Park Cover of FNF's Chaos song!

Watch for when arrow symbols match above your character on the right, which is when you need to press the identical arrow keys to hit your notes, doing it until the song ends to win, but be careful not to miss hitting notes too many times in a row, or you lose and have to start again from scratch. Good luck, enjoy!