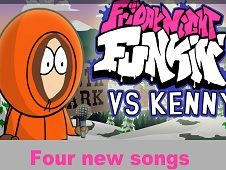 What is FNF Vs Kenny from South Park?

Who is Kenny from FNF?

Kenny is one of the main characters of the famous South Park series who manages to stand out by the fact that almost every time he manages to die in a very strange way. It is also very easy to notice and remember, due to the clothing she has, Kenny wearing an orange Eskimo suit, with a large hood, through which he can only see. He wears a pair of brown gloves on his hands and a pair of winter shoes on his feet.

Even if he dies in an episode (Kenny Dies), he soon reappears in the series, because the fans of this character constantly demanded him. In the game vs Boyfriend, the action of the game is without, in nature, in a forest full of snowy fir trees, and Girlfriend is up on the box, just like every time.

In this mode you will be able to find four new songs:

Use the arrows to beat Kenny!