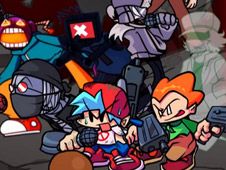 What is FNF vs Improbable Chaos Mashup Mod?

We know that you never get tired of playing new Friday Night Funkin mods online for free on our website, and the crazier the mods, the better which is why we were excited that right at this moment we got to share with you all a new and awesome game called FNF vs Improbable Chaos Mashup Mod, where sixteen characters from various mods come together to sing Improbable Chaos, a really cool song, so you think you can beat them all?

Help Boyfriend defeat 16 characters in a rhythm battle, all at once!

Despite the enemies swapping places with one another, your goal remains the same, which is to reach the end of the song and have the progress bar in your favor by playing all the notes of the songs at the right time.

To do so, when you see arrow symbols match above BF's head, press the same arrow key on your keyboard to hit those notes, but be careful not to miss too many of them, or you lose the game.

Give it your best, have fun as only here is possible, and invite your friends to check out our daily new mods too, they will love it here!

Ocean Kids Back to School
ADVERTISMENT