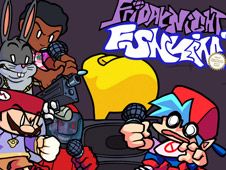 What is FNF: SiIvagunner Mod Pack?

You're about to have once more lots of fun with new FNF Games online on our website, as our administrative team is delighted to share with you all the game called FNF: SiIvagunner Mod Pack, which features more than 20 songs, some of them the original ones, other one's mixes, remixes, custom songs from other games, most of them gathered by Silvagunner, who has been one of the most popular modders of FNF!

Tackle all the Silvagunner songs and characters, and win!

No matter the song you are playing on, and the antagonist you are facing, the goal remains the same, which is to help Boyfriend win the rhythm battles, so go to the end of the songs and turn the progress bar in your favor, simple as that. To achieve that, you need to play the notes of the songs according to their charts.

That is done by pressing the arrow keys at the same time as arrow symbols match above BF's head, but don't do it too late or too fast, since that is a miss, and missing too many notes in a row means losing the game. Good luck, and have fun!