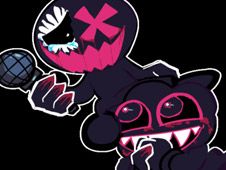 What is FNF SiIvagunner Corruption Pack?

We've got plenty more new FNF mods online in store for you all on our website, and we're positive that you won't miss out on the chance to play them, which is why right at this moment you are invited to play FNF SiIvagunner Corruption Pack, which has new songs, new sprites, and new character designs, being a spin on the original game that we loved, so why wouldn't you?

What is FNF SiIvagunner Corruption Pack?

Firstly, know that this game utilizes lots of the Silvagunner songs that have appeared over the past couple of months, which are cool remixes of the originals, and the characters such as Boyfriend, Girlfriend, the Spooky Kids, Daddy Dearest, and others are going to be 'corrupted', so they will look 'hacked'. Also, we've got sprites coming from Phantom Fear, who does them really nicely!

Help Boyfriend defeat the various antagonists he encounters in musical battles of rhythm! When you see arrows floating above him match one another, press the same arrow key on your keyboard, and you will have to hit the note. Be careful, because if you miss playing the note, and do it multiple times in a row, you ruined the song and lose.

Good luck to you, and we hope to see you keep playing our new Friday Night Funkin' Games!