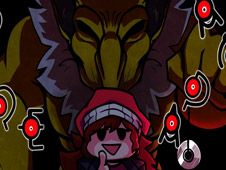 What is FNF vs Hypno Lullaby Mod?

It can still be Halloween if you want it to, especially if you're playing Friday Night Funkin' Games online on our website, which is precisely what we invite you all to do and enjoy right now with the awesome game known as Hypno Lullaby Mod, where you are going up quite a scary creature on no less than four awesome songs:

Hypnotize your enemy with your amazing musical skills!

Whether you choose to play this game in the story mode or free play mode, the goal you have is identical and it is reaching the end of the songs by playing all their notes according to the charts, something for which you use arrow keys.

How? Well, you watch for when arrow symbols match above BF's head, and, at the same time, you press the identical arrow key. Be careful not to miss doing it too many times in a row, or you end up losing. Enjoy!