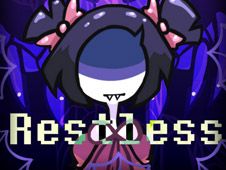 Hypno’s Lullaby Undertale Mix is what we invite you to experience in the FNF Restless mod against two scary characters called Muffet and Frisk, and we're sure that you're going to have just a blast!

When the floating arrow symbols match on the top right side of the screen, press the identical arrow keys to hit your notes, doing it until the song ends to win, but know that if you miss too many notes in a row, you lose instead, which happens if your health bar depletes. Good luck, enjoy!