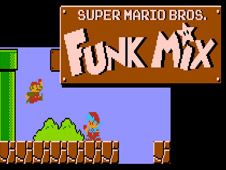 What is FNF vs Mario Bros (Funk Mix)?

Boyfriend Vs the Mario Bros is the FNF mod that everyone wanted to play right now, even more so with a cool funk mix of songs for you to enjoy a whole lot of, which is why we invite you to go up against these classic video game characters on the following songs:

Let's funk it with FNF and the Mario Bros!

From the main menu, you will choose between the story mode and free play mode, after which you have to give it your best to play all your notes according to the charts until the songs end to win. To hit those notes you watch for when arrow symbols above BF match one another and press the identical arrow keys. Missing doing that many times in a row leads to losing, so be careful not to let that happen!